The registration of users is an integral part of the State System of Information on Water Resources and aims to record and systematize information regarding users of surface and underground water in a given region or hydrographic basin.

This database reflects the set of users of water resources and guides some of the main management instruments, such as grants and charges.  In addition to these, other instruments, such as the classification of water bodies and the Basin Plan, have in the register an important source of information.

According to the State Water Resources Policy (State Law No. 3.329 / 99 [PFA1]), individuals or legal entities governed by public or private law that collect or consume water, release effluents or carry out non-consumptive uses are classified as water users directly in water bodies, such as rivers, streams, lakes or aquifers, in the State of Rio de Janeiro.

Currently, the State Institute for the Environment (INEA) is responsible for managing the register of users of water resources under state ownership.  Users are responsible for carrying out the registration, which is self-declaratory.

On October 17, 2006, through State Decree No. 40.156, [PFA2] the State of Rio de Janeiro institutionalized the National Register of Water Resources Users (CNARH) as the only register in the State for the state of domain waters, Facilitate and expand the process of regularizing the use of water.

After ten years of integrating the registries of water users at the federal and state levels, a new stage begins with the technological evolution of the registration and management system for registries prepared and developed by the National Water Agency (ANA).

The new CNARH, CNARH 40, aimed at users who want to become regularized, changed the concept of registration.  The previous one, CNARH 1.0, adopted the concept of integrated enterprise, and registered under the same registration number (declaration) all interferences (captures and releases into water bodies) and all uses/purposes of the enterprise.  The CNARH 40, on the other hand, adopts peer-to-peer registration.  This means that each interference point will be processed with a corresponding usage and throughput impact.

The water resources user registration platform was also redesigned.  The Federal Use Regulation System (REGLA) can be accessed at www.snirh.gov.br/cnarh.

Currently, 583 interference points (there were 475 at the end of 2019) are registered in the Guandu Hydrographic Region, divided between Captures and Launches, as shown in the table below.

In Hydrographic Region II, the purpose with the largest number of entries is “Human consumption”.  Then, the purposes “Other” – which include funding and launchings of projects that do not fit the other purposes, such as hotels, inns, gas stations and transport companies – and “Industry” are those that have the highest number of entries in descending order, as shown in the chart below. 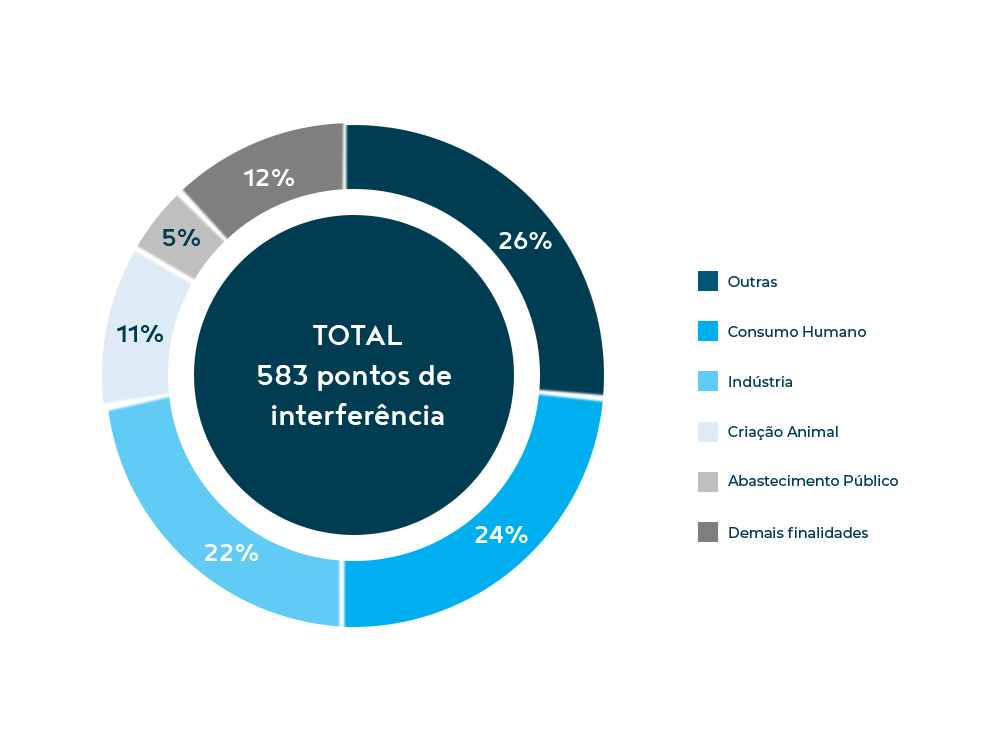 The interference points and respective users registered in the Guandu Committee’s area of ​​operation are available for consultation below.  The 2020 information was updated in November of the same year, with data for the respective month.

Click here for more information on CNARH 40 and REGLA.